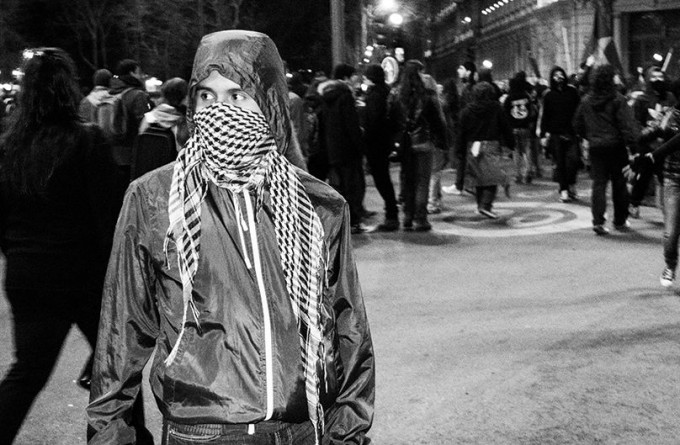 A Muslim woman was purposely run over by a driver who plowed through a Belgian police checkpoint Saturday during a far-right protest in the Brussels suburb of Molenbeek.

In the stunning scene caught on video, the Audi A1 bypasses a checkpoint and barrels right into the woman while the vehicle’s passenger appears to capture images of the mayhem with his cellphone.

The woman is hoisted onto the hood of the vehicle before being thrown to the ground and clipped by the compact car as it speeds off.

She sustained head injuries and fractures in various part of her body, according to local reports.

More than 400 anti-immigration activists, wearing masks and shouting racist slogans, had descended upon the area Saturday.

The immigrant-heavy neighborhood has been a target of protests after the suicide attacks on a Brussels airport and subway station last month that killed 32 people.

Two 20-year-old men, reeking of alcohol, later walked into a police station in order to turn themselves in for the violent hit-and-run, according to Belgian news outlet La Libre.

Police said the men were under the influence of alcohol and drugs, in possession of smoke bombs, and claimed they had no recollection of the incident.

Both men, who are from Molenbeek, were charged with armed rebellion and hit and run, the outlet said.

The injured woman was recovering in a hospital Sunday.

In recent weeks, police in Molenbeek have arrested hundreds of anti-Islam protesters, and a France-based far-right group staged a demonstration there again on Sunday.

Authorities in the Belgian capital, fearing violent disorders, banned all demonstrations after a group of right-wing hooligans congregated at the same square last Sunday.

Molenbeek, dubbed the “jihadi capital of Europe,” is home to one of the largest Muslim communities in Brussels and has been a hotbed of radical Islamic sentiment.

Some in other countries have blamed Belgium’s underfunded security forces for not stemming the tide of extremism which has taken hold in the country.

The notorious area was home to some of the men who staged the Nov. 13 attacks in Paris that killed 130, which were also claimed by the Islamic State group.

Paris attack suspect Salah Abdeslam, who took part in the gun and bomb attacks in France, was captured in his Molenbeek hideout just four days before the Brussels bomb attacks.

Belgian Prime Minister Charles Michel has admitted that “Almost every time (a terrorist attack occurs), there is a link with Molenbeek.”