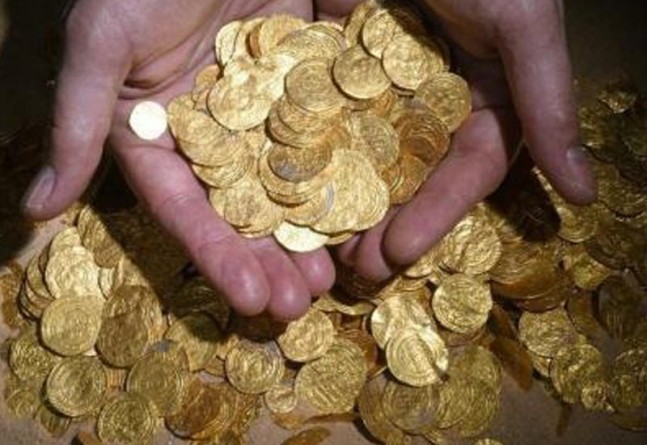 As long-simmering dispute between U.S. treasure hunters and the Colombian government over rights to a sunken Spanish galleon thought to be laden with billions in gold and silver may soon play out on the high seas as the salvagers said Saturday they are planning a voyage to the site to try to recover the booty.

Such an expedition may bring the Sea Search Armada salvage partnership face to face with the Colombian navy, now guarding the site where the galleon is believed to have sunk three centuries ago off the Colombian coast near the port city of Cartagena.

The fight over the galleon San Jose, which sank in 1708 after an attack by British pirates, made headlines in December when Colombian President Juan Manuel Santos announced that his navy and certain unnamed technical advisors had found the wreck and that he would build a museum to house its relics.

The ship was part of a convoy headed to Spain carrying a cargo of gold, silver and jewels whose modern-day value is estimated at between $3 billion and $10 billion. A Colombian fleet commander last month said naval ships have been sent to guard the site from poachers.

"This is one of the largest finds of sunken patrimony in the history of humanity," Santos said in an address to the nation last month, later adding that Colombia had every intention of "maintaining sovereignty" over the wreck.

But Seattle-based Sea Search Armada claims to have located the San Jose in 1982 and said it has been trying ever since to gain permission from Colombia to salvage the site and reap a 50% finder's fee on any treasure recovered. A 2007 Colombian Supreme Court decision upheld the partners' rights, said Danilo Devis, attorney for the group.

"This is not a new discovery but a re-encounter with what we discovered and described in 1982," Devis said by telephone from his office in the north Colombia city of Barranquilla. "Since 2007, the government has eluded its responsibility and has now invented this farce of a discovery to definitively seize the property."

Since 1980, Sea Search Armada investors have spent more than $10 million to find the wreck and pursue its claim with the Colombian government, managing partner Jack Harbeston said in a telephone interview from Seattle last week. He said the "best proof of our discovery is the accuracy of our location" and photos showing underwater cannons.

After the pace of negotiations with the government to begin salvage operations picked up early last year, Harbeston said he thought Colombia was about to finally issue a permit. "Instead, they carried out an operation behind our backs," Devis said.

A spokeswoman for Colombian culture minister Mariana Garces Cordoba did not return a recent emailed request for comment.

In a letter to Garces last week, Devis asserted the partners' rights as locator of the wreckage and said that the government, by insisting on 100% ownership to the wreck, was acting in violation of the nation's highest court. Moreover, he informed Garces that his clients were organizing a marine expedition to the site.

"We are talking to our technical advisors this weekend and making plans for the trip by boat," Devis said. Such a voyage not only could set up a confrontation with Colombian naval ships, but place the U.S. government in a delicate position of mediating between a U.S.-based investor group and a close ally.

In a letter last month, culture minister Garces invited Sea Search Armada to send an expedition to the offshore coordinates detailed in the 2007 Supreme Court decision. But the partners maintain the court decision gave them rights to a broader but undefined "vicinity" of marine floor.

"They are trying to hold us to exact coordinates when they know the location has moved," Harbeston said.

The matter is complicated by the fact Spain maintains it too has rights to the wreckage, a claim that has been upheld in past U.S. court battles over sunken treasure. The U.S. generally backs "eternal" sovereign claims to naval wreckage to protect its control over any U.S. ships that have sunk in international waters or that may sink in the future.

Peru has also expressed a claim to any treasure recovered from the San Jose; as the bulk of the gold and silver could be considered Peruvian national patrimony since it was mined and processed there when Peru was a Spanish colony.