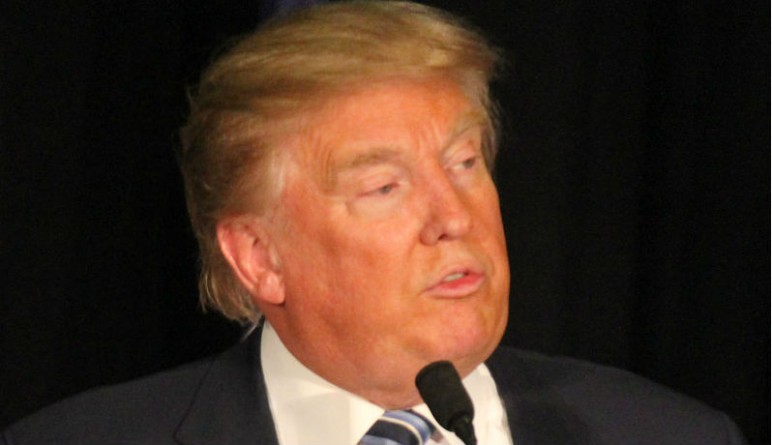 An angry mob broke through steel barricades and tried to storm a Donald Trump appearance in California on Friday — a second day of protests that forced the billionaire to sneak inside by climbing over a wall.

“That was not the easiest ­entrance I’ve ever made,” Trump said as he began his speech at the Hyatt Regency near San Francisco’s airport in Burlingame.

“It felt like I was crossing the border, actually.”

Protesters threw eggs at police officers and shouted obscenities at those entering the luncheon to hear Trump’s speech.

Some carried Mexican flags in protest of Trump’s proposal to build a wall along the Mexican border.

“Would you protect Hitler?” one protester shouted at police trying to control the crowds.

The chaos took place a day ­after 20 people were arrested outside an Orange County rally that left one Trump supporter with his face bloodied in a scuffle as he tried to drive away.

Outside the Hyatt Friday, cops in riot gear formed a line around the hotel when the crowd broke through the barricades.

Police marched shoulder-to-shoulder with their batons in hand to drive the crowd away.

“Mr. Hate, leave our state! Racists are not welcome here,” one man shouted through a megaphone.

At one point, a Trump donor was slugged in the in the face as he attempted to enter the luncheon.

“I’m just a citizen wanting to hear Trump speak and I can’t get through,” Chris Conwaytold the LA Times. “This isn’t Chicago. I for one am not going to allow that. Just looking at this hat causes them to react that way.”

Inside the Hyatt, Trump addressed the convention of California GOP elites, calling for the party to unify behind him but also bragging that he doesn’t need their support.

“There has to be unity in our party,” he said. “Would I win — could I win — without it? I think so, because they’re going to be voting for me.”

Trump has been under fire in the liberal state for his proposal to build a wall along the Mexican border and his comments about illegal immigrants who commit violent crimes.

A day earlier in Orange County, Trump invited families of people killed by illegal immigrants to join him on the stage.

“They all have a very similar story to tell.

Trump filled the Pacific Amphitheatre to its capacity of about 8,000, with many hundreds more turned away.

Outside the rally, protesters caused chaos, destroying a police vehicle in the process.

A rowdy demonstrator jumped on the vehicle, smashing its front and rear windows and denting the roof. Other protesters sprayed graffiti on a police car and the venue’s marquee.

California’s presidential primaries has historically come after leading candidates have already won the necessary delegates to be the nominee — but this year it will either clinch it for Trump or force him into a contested convention.

Trump’s remaining rivals can’t beat him in what’s left of the primary season. Their only hope is to deny him a majority of delegates heading into the July convention and wrestle for the prize in multiple ballots there.

The California GOP primary will award 172 delegates. Trump now has 996 delegates, Ted Cruz 565 and John Kasich 153, according to The AP’s delegate count. It takes 1,237 to clinch the nomination.