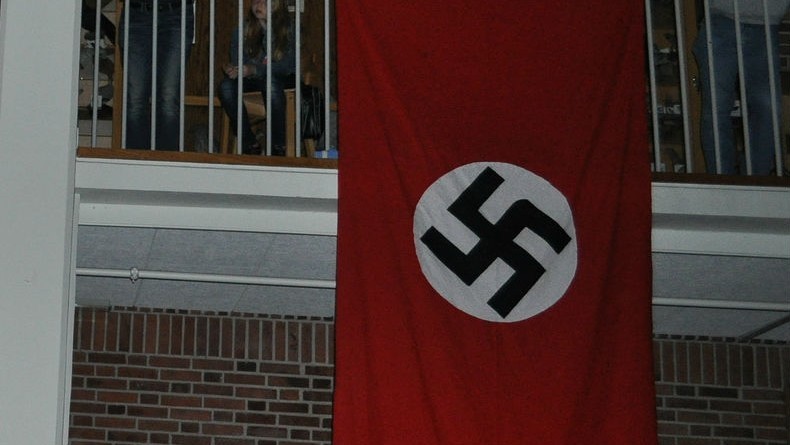 He sparked outrage when he ordered a birthday cake for his son, Adolf Hitler — but now Isidore Heath Campbell insists he’s just a misunderstood Nazi dad.

Campbell, 42, says his clan is being “treated like garbage” — all because of his affinity for one of the most evil figures in world history.

“A person makes a person, a name doesn’t,” he says in the new documentary “Meet the Hitlers,” released Tuesday on iTunes.

Campbell, of New Jersey, first made headlines in 2008 for complaining that a ShopRite supermarket refused to write his then-7-year-old son’s name on a birthday cake.

Days later, Campbell and his then-wife, Deborah, both white supremacists, had their children taken away.

Campbell says his custody battle continues, and has nothing to do with child neglect, News.com.au reported.

“I have different beliefs. I believe in whites (living) with whites, blacks with blacks, Spanish with Spanish,” he says in an excerpt shared by The Atlantic. “I don’t see anything wrong with that.”

He continues: “(Child protective services) stripped my kids down in my house, checked my kids all out. They found no child abuse, no nothing. They got a court order and they removed my kids. That was it. I didn’t even get to say goodbye.”

In June 2013, he was dressed in full Nazi regalia when he marched into a New Jersey courthouse to try to persuade a judge to allow him visitation with Heinrich, who was taken shortly after his 2011 birth.

The state Division of Youth and Family Services said the boy was removed because of previous violence in Campbell’s home.

Meanwhile, Campbell found himself in some more legal trouble when he allegedly assaulted his new fiancée, Bethanie Zito, in southern Pennsylvania.

Campbell — head of the pro-Nazi group Hitler’s Order — was arrested as a fugitive in March in Shippensburg on an aggravated assault charge after authorities refused Zito’s demand to retract her statements that he had beaten her, MyCentralJersey reported.

In the documentary, Campbell shows a large swastika with the names Aryan, Hitler, Deborah and Honzlynn tattooed on his arm.

“This is my circle of love,” he proudly proclaimed.