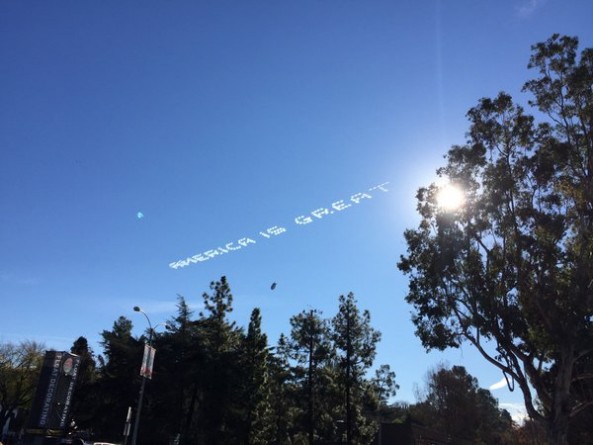 The skywriting scrawled over the annual New Year's Day parade in Pasadena read: "America is great, Trump is disgusting."

Running with the slogan "Make America great again," Trump remains the frontrunner among Republicans vying to be elected president this November. He's retained a lead in the national polls for months, despite being denounced by many for remarks perceived as sexist and racist, including suggesting that Muslims shouldn't be allowed in the country.

Trump hasn't directly responded to the writing, but he did retweet a supporter's response to a report about the skywriting.

"They're spending millions but you're still going to win go Donald Trump," said user @sprinklermanus in reply to a CNN tweet. The user also tweeted Friday that "homosexuality is a sin" and disparaged another Twitter user as a whore.

The game drew more political attention earlier in the day, when candidate Carly Fiorina tweeted she was rooting for Iowa despite having graduated from Stanford.